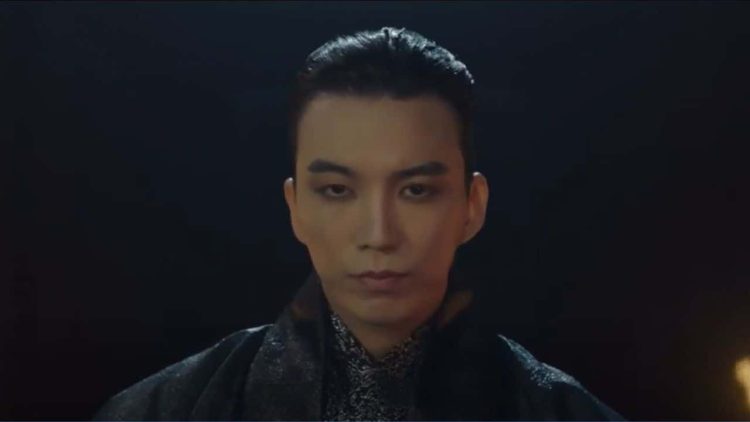 
In the ninth episode of the second part of ‘Alchemy of Souls’, Jang Uk discovers Bu-yeon’s true identity while Jin Mu gathers his secret organization of soul shifters. The episode is now streaming on Netflix.

Naksu, in Bu-yeon’s body, tells Jang Uk that she regained her memories when the blue marks appeared in her eyes. She is not Bu-yeon, and the soul inside her body belongs to someone else.

Go Won’s arrival interrupts their conversation. Jang Uk asks her not to let anyone come too close to her, as the marks are only visible up close.

Master Lee assures Jin Ho-gyeong that Bu-yeon will come out of Gwido as Bu-yeon’s soul possesses immense powers that even he cannot fathom.

Naksu, Jang Uk, and Go Won come across an Ice Stone in Gwido that does not have the power of the sky. Unlike the one inside Jang Uk, this stone desires to absorb human energy like a soul shifter that has run wild.

Jang Uk and Go Won reveal that they have been working together for a while now. Go Won pretended to side with Jin Mu to find his army of soul shifters, and Jang Uk lied about going to the North Fortress to get Jin Mu to put his plan into action.

Jin Mu has created several soul shifters using the Soul Ejector. These soul shifters need the Ice Stone to prevent themselves from running wild. Jang Uk must wipe out this secret organization entirely in order to defeat Jin Mu.

Go Won rejected the prospect of becoming powerful by betraying Jin Mu because he got rid of his turtle. At Go Won’s request, Songrim is secretly supporting Jang Uk.

The door opened right in front of them, allowing them to reach Naksu. She comes to the conclusion that Bu-yeon’s soul must have opened the door and called for Jang Uk to protect herself.

Master Lee discusses with Jin Ho-gyeong how she used the Ice Stone to save her unborn child, who grew up to be Bu-yeon. She was born blind like Jin Seol-ran and possesses divine powers just like her.

Master Seo Gyeong left the Ice Stone in Jinyowon even though Jin Seol-ran passed away. Master Lee hypothesizes that Jin Seol-ran’s soul might still be in the stone and the child Jin Ho-gyeong saved might be Jin Seol-ran.

While talking to Go Won about herself, Naksu, as Bu-yeon, tells him that she always wished for him to be Jang Uk’s ally. Go Won reveals that he thought he would forget Naksu easily after her death, knowing that she deceived him, but that did not happen.

He wanted her, and his desire to destroy that which he could not have led him to become Jang Uk’s enemy. He feels remorse and shame now when he thinks about her, but she tells him that Naksu would want him to let go of the pain as he has had enough of it.

Yul finds the soul potion, which Master Heo claims to be evil and bewitching, in So-i’s belongings. The queen, who had been locked up after soul shifting, was also fed this.

Yul comes to know that So-i regretted using this potion on Naksu. The person who consumes it hears bells and goes insane.

Yul and Park Jin meet the queen to ask her about the potion. When she says she does not want to put an end to the alchemy of souls as it can be a source of unlimited power, Park Jin stresses that no one should have limitless power and immortality.

He tells Yul that even though Jin Mu was controlling Naksu, it does not change the fact that she used the alchemy of souls in the first place.

Today, Jang Uk has unlimited power, but with that comes the responsibility to choose the right path. If his choice is wrong, it could spell disaster for the world. This responsibility brings a lot of pain and burden, which is too much for any human.

Go Won leaves Gwido first to attend the meeting of Jin Mu’s secret organization that is planning to attack Jinyowon. Naksu agrees that every single soul shifter needs to be killed to put an end to Jin Mu’s greed.

Despite coming to the realization that Bu-yeon is Naksu, Jang Uk decides to live in ignorance, as the truth will make him responsible for killing her. They cannot stay in Gwido together forever, despite their wishes, because that is not the right thing to do.

At the meeting of Jin Mu’s secret organization, Go Won betrays Jin Mu. With Songrim’s support, Jang Uk kills the members of the organization but spares Jin Mu, as it is not his revenge to take.

Jang Uk lures him to Gwido, where Naksu is waiting for him. He finds the Ice Stone there, and she offers to put it inside him. He agrees, not knowing that it is the empty one.

After putting it inside him, she tells him that he will not die quickly but wither away. She reveals her true identity to a dying Jin Mu. She plans to stay in Gwido until only Bu-yeon’s soul remains in her body.

The king accuses Park Jin of going behind his and the Unanimous Assembly’s back to annihilate Jang Uk’s only rival, Jin Mu. Park Jin tells him that this is not a power struggle, but the king is unhappy with Songrim possessing the power of the Ice Stone.

The turtle brings Jinyowon’s plaque to Naksu, while Jang Uk suffers the onslaught of wraiths alone after killing several soul shifters in one day.

Master Lee tells Park Jin that the Ice Stone found its way to Jang Uk, despite so many powerful people fighting for it. He assumes that Jin Seol-ran, who has been staying here and protecting the stone, chose him and Naksu.

After escaping Gwido, Naksu meets Yul, who tells her that Jin Mu controlled her three years ago and that her actions were not her own. However, she tells him that she cannot use that to justify her actions as she was a soul shifter driven by vengeance.

Yul shares the same knowledge with Jang Uk, and he agrees with Naksu that they cannot use her approaching death or Jin Mu’s control as an excuse to be together.

Jang Uk decides to go to the North Fortress because if he stays here then people would keep tormenting Park Jin and Songrim regarding the Ice Stone. Maidservant Kim and Park Jin decide to follow him after their wedding.

Naksu appears before the Unanimous Assembly as Bu-yeon. The king and the assembly decide to extract the Ice Stone from inside Jang Uk, using Bu-yeon’s divine powers, as all the soul shifters are dead now.

However, she tells them about Jang Uk deliberately ignoring the existence of another soul shifter. He must find them and watch them die first.

Naksu calls for Jang Uk using the jade. She tells him that she has already let him go, but he walks towards her and embraces her anyway.

Yun-o and the queen enter Gwido, looking for Jin Mu. They find him and ask him about the last Soul Ejector for the queen to perform the alchemy of souls. Jin Mu kills the queen and extracts the Soul Ejector he had hidden inside her.

He shifts his soul into Yun-o’s body with the help of the Soul Ejector. He then goes to the king. It is revealed that he had promised the king the power of the Ice Stone, and the members of the Unanimous Assembly were also a part of their scheme.

Jang Uk walks towards three caskets and finds Cho-yeon, Dang-gu, and Sang-ho weeping beside them.