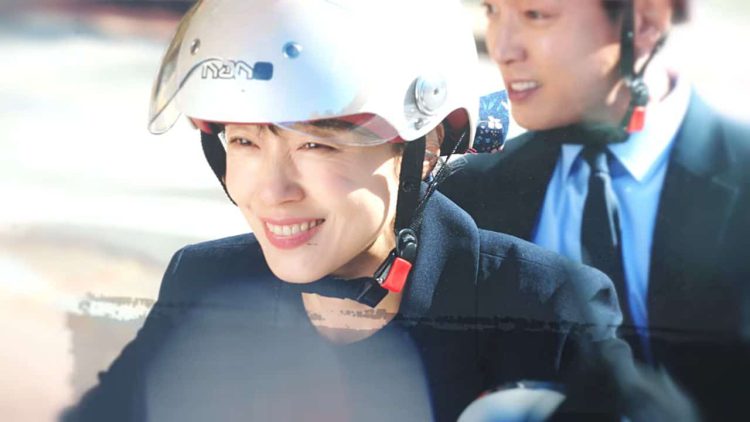 
In Crash Course in Romance season 1 episode 3, Haeng-Seon’s view of Chi-Yeol takes a turn after his true identity becomes known to her; Su-a’s mom pulls some strings and causes a drastic last-minute change in the academy’s schedule.

Haeng-Seon and Chi-Yeol go to the police after the BB gun attack that they dodged at the latter’s shop. The police aren’t that confident about the case since the locality has a deficit of security cameras.

The next day, Chi-Yeol arrives at the shop as Haeng-Seon leaves for the queue outside the academy. Thanks to her getting back to the form she used to exhibit in her handball days, she gradually gets Hae-e better seats in the classes.

As Hae-e does significantly better at maths, thanks to Chi-Yeol’s teaching, the latter’s dynamic with Haeng-Seon keeps being cutesy and antagonistic. When Hae-e sees that Haeng-Seon and Chi-Yeol are having a tussle, the revelation hits her mother.

Haeng-Seon does a complete one-eighty and changes her attitude towards Chi-Yeol, and she becomes sweet and saccharine.

Meanwhile, Su-a’s mother, Su-Hui, meets the director of The Pride Academy to shift the Med School All-Care program from the winter to summer and convinces him by offering a bribe.

Chi-Yeol asks for blackboards in exchange for accepting the new schedule, before overhearing his old friends talking smack about him behind his back and later his assistants doing the same too.

Haeng-Seon arrives at the academy to deliver food to Chi-Yeol after he couldn’t make it to the shop that day.

However, the star teacher gets very upset and sends Haeng-Seon and her food back, since her presence there at the time when they’re preparing questions for the All-Care could compromise the level 1 test.

Meanwhile, Sun-Jae’s mom lashes out at him for helping out Hae-e with the level 1 test she’s also gonna take. He tells her that she terrifies him sometimes and the next day he has to take her to a hospital after she mixes sleeping pills with alcohol and passes out.

He reaches late to the test but Hae-e stalls the invigilator enough for him. Later, at the school, she trips and a new boy enters the one-sided romance between her and Sun-Jae. This guy, named Seo Geon-Hu, saves Hae-e from falling down the stairs.

Meanwhile, Chi-Yeol runs late to the meeting and Haeng-Seon has to give him a ride on her scooter, making him owe her one when he arrives at the academy on time.

Hae-e passes the exam and gets into the All-Care program, along with Sun-Jae and Su-a, who is livid that her rival made it to the program. Meanwhile, Haeng-Seon is over the moon and drinks too much.

Crash Course in Romance episode 3 ends with Haeng-Seon running towards Chi-Yeol in a drunken stupor and lifting him in the air, spinning around before the two fall to the ground.