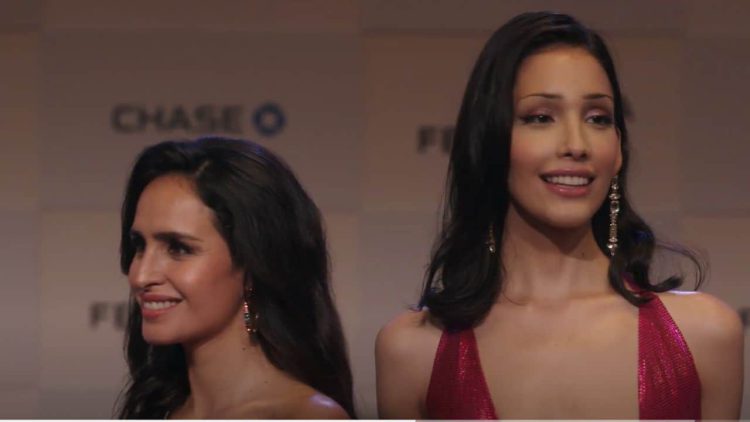 
In the eighth episode of the second season of Gossip Girl, Audrey plans to teach Julien a lesson and get back at Jessica at the same time. The episode is now streaming on HBO Max.

Julien has been sleeping with Obie, but they are still unsure about where they stand as a couple. Audrey wants to sue Jessica to help Kiki, who thinks she has already lost everything.

At Tribeca Film Festival, Aki meets a friend, Ingrid. She asks him to join her for a Q&A, but he needs to leave to help Audrey with Kiki. Meanwhile, Luna has been seeing a man named Florian.

Julien asks her followers to block Gossip Girl and stop her from doing any more damage. The drama at Kiki’s debut has skyrocketed Julien’s popularity while making Monet a target at school.

Max gets an injunction drawn up to stop Jessica’s pop-up. Audrey forges her mother’s signature on the document, despite Aki’s warnings. Julien apologizes to Audrey again and promises to stay away from Jessica and her father.

Shan and Zoya plan to go to the film festival together and convince a celebrity to tweet about canceling Gossip Girl. Shan arranges the passes for them.

A changed Kate lies to Obie about a meet-and-greet event at the Harvard Club to get his mother to come to the US. She assures him that she will personally call his mother and convince her to join him. Obie immediately texts Gossip Girl about his mother’s possible trip.

Florian arranges for Luna to style Julia Fox for her Tribeca premiere. She finds out that her mother, Dolores, is in town and also in the film, but she did not tell Luna about it. She decides to confront her mother.

Gossip Girl posts a video of Jessica showing her new designs, named after Julien. She claims that Julien will come to her pop-up. Since she is not using Kiki’s designs anymore, the injunction does not stand.

Jordan meets Kate and tells her that she has changed. She is posting lies and manipulating facts to sell stories. He asks her to stay away from the account for a few days to think straight, but she refuses to listen to him.

Luna meets her mother, who does not allow Luna to call her mom. Apart from not telling her about the film, she does not even want her to come to the premiere. When Monet tells her that Luna is styling Julia Fox, she asks Luna to style her instead.

Aki misses out on the opportunity to meet Werner Herzog because of Audrey. Ingrid asks him to move beyond high school drama and think about himself also. She offers him the role of moderator for Brit and Zal’s Q&A, and he happily agrees.

Florian does not reply to Luna’s message about not styling Julia Fox. Luna also finds out that her mother never actually planned to let Luna style her; instead, she tells Luna to learn from the stylist she has hired.

Monet tells Luna that her mother never raised her because she is jealous of her; she never let Luna near her. Monet asks her to stop backing down to make her mother look better and stand up to her.

Gossip Girl posts a picture of Julien with Jessica, which makes Obie message Audrey about giving Julien a chance to explain herself. Audrey agrees to meet her.

Audrey tells Julien to cohost Jessica’s pop-up and convince everyone that Jessica was inspired by Kiki. Audrey gives Julien her permission to do anything to make that happen and promises to forgive her if she manages to do that.

Audrey plans to teach Julien a lesson for meddling in her affairs. She and Max cannot go to Aki’s event because they need to see their plan succeed.

Julien sets her own plan in motion. She invites Kiki to Jessica’s pop-up. Obie points out that Julien has grown considerate over time.

Jordan gets the other teachers to confront Kate. Initially, they threaten to expose her identity, but Kate convinces them to give her a month to prove that she is on the right path.

Audrey sabotages Jessica’s pop-up by changing the prices and the sizes of the dresses. People on social media shame Julien for working with Jessica, who only sells clothes up to size eight.

Furthermore, people protesting against fast fashion show up and throw paint on Julien and Jessica. A crying Julien confronts Audrey, who tells her she had to do something to keep Julien away from her life. She accuses Julien of being a bad person.

Aki’s event is a huge success, but he refuses another opportunity for Max and Audrey. Ingrid tells him that Audrey and Max are not his partners, pointing out that they have been absent for the whole week. She then kisses him, and Zoya witnesses that.

Luna’s mother puts her on the not-allowed list. Florian is present there, but he does not come to her aid. Luna finds out that her father went ahead with her mother’s plan for her sake.

Aki is disappointed in Audrey and Max for missing his event. Julien asks Zoya and Shan to not tell Audrey about Aki’s kiss and mind their own business.

Luna holds her mother accountable for choosing her ego over her family; she always kept Luna at a distance. Dolores tells her that she wanted to be a mother, but she did not want a daughter because she knew that would make her insecure.

Luna sends a tip to Gossip Girl that her mother, who has built her career by banking on the fact that she is Mexican, is from Madrid, not Mexico. The world comes to know her mother’s truth.

Kiki is also roped into Jessica’s scandal because she was seen there when the pop-up was sabotaged. Audrey and Max rush to find Kiki, and Aki reluctantly follows.

Kiki had a relapse, and she has decided to go to rehab. Florian tries to apologize to Luna, but she tells him that she is not ready for anything.

Kate sleeps with Jordan, and the two are interrupted at Kate’s house by Mrs. de Haan. Monet had earlier hugged her mother and told her that she loves her. This changed Mrs. de Haan’s view of Gossip Girl.

She thinks Gossip Girl is changing her daughter. She asks Kate to continue sending tips to Gossip Girl, along with other teachers. She promises to provide them with her support in return.

Julien plans to take down Gossip Girl by finding out her identity. Obie goes out to secretly warn Gossip Girl about it. However, he gets attacked by an unknown assailant on the street.