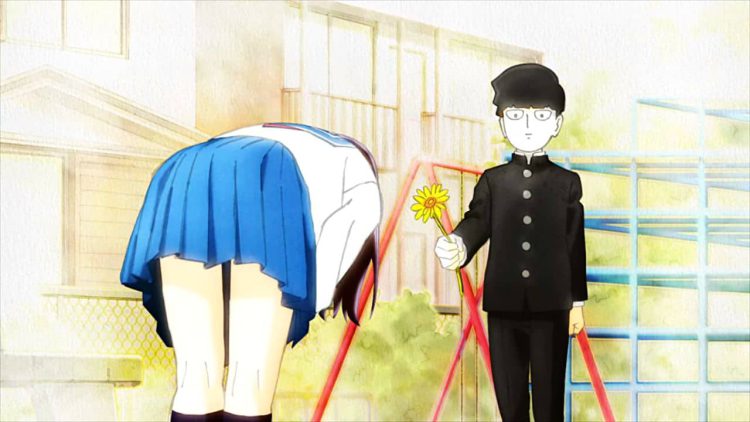 
‘Mob Psycho 100’ comes to a close with its season 3 finale which sees the titular character contend with his other half while finally moving ahead with his confession to Tsubomi.

Reigen and Serizawa reach the tornado and Serizawa stops in his tracks since all his psychic powers are getting sucked out. Reigen persists and keeps heading towards Mob.

He faces a lot of pushback from the raging tornado and Mob’s powers but his will is unrelenting. Mob, meanwhile, continues to tussle with the other half of him who’s always been buried deep within his consciousness.

It’s the personification of all his emotions he’s had to keep buried and repress ever since he decided to become mature and responsible. The other half argues that Mob must perish and let him take over.

He also argues that going to Tsubomi in his form will be better since it’s always been him that has loved her, not the blank-faced Mob. He claims that he’s always loved Tsubomi because she accepted him in spite of his psychic powers when others wouldn’t.

Meanwhile, Reigen tries to reason with Mob and help make him surface and stop the virulent tirade. The other half argues again with Mob that he knows very well Reigen is nothing more than a liar.

Reigen then reveals himself to be working with Dimple, which is why he’s been able to withstand Mob. Reigen then comes clear to Mob and confesses that he’s been a liar all this time and that he’s used him for his own ends many times.

This confession brings out the real Mob and the tornado comes to an end as well. Reigen then proceeds to help ease Mob and help him embrace all aspects of himself.

Mob then goes to Tsubomi and quickly comes back, surprising Reigen and Dimple and telling them she rejected him. He cries, with tears rolling down his eyes in a rare sight.

Reigen and Dimple console him as they all walk off into the sunset. Some time passes, and Mob, along with a number of friends and colleagues give Reigen a surprise party on his birthday.

It’s revealed that even though Tsubomi rejected him, the two keep in regular contact with each other. ‘Mob Psycho 100’ comes to a close with Mob having changed into a better version of himself, with a lighter consciousness and readiness to express joy and other emotions freely.