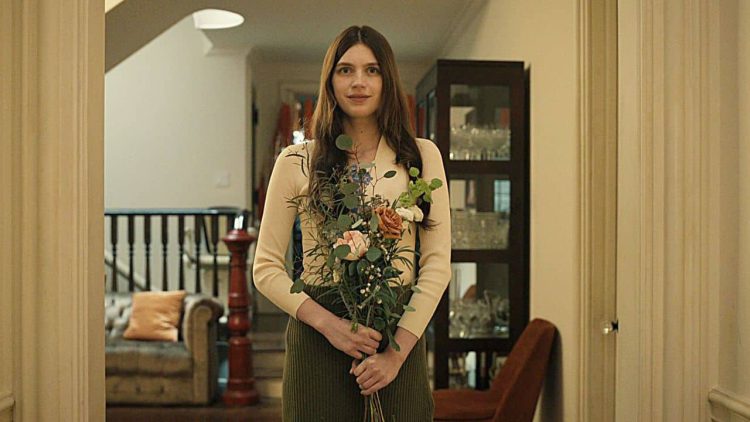 
The first episode of Servant season 4 sees Leanne facing the Church of the Lesser Saints again as she prepares for Dorothy’s return. The episode is now streaming on Apple TV+.

Leanne cleans the Turner household with Sean’s show playing on the TV. She receives a call from Julian while cooking Dorothy’s favorite cake.

He informs her that Sean has to sign a number of forms before they can leave. Leanne asks about the flowers, and Sean tells her that they are in the car’s trunk.

Leanne comes out of the house to retrieve the same flowers, and on her way back inside, she notices the door open. She suspects someone has broken in.

Eventually, she sees the intruder. After attacking him, she heads right outside, only to find more members of the cult, the Church of the Lesser Saints, surrounding her.

Leanne locks herself in the car. The arrival of another car forces these members to hide. One of the members claims that only the church can see them.

Leanne calls Roscoe to inquire where her followers are, who usually protect her. She learns that the police have cleared the park. Leanne requests them to take a cab and come as soon as they can, as the church is closing in on her.

Soon, fog shows up on the streets. Leanne observes a street vendor and suspects him to be part of the cult. She hopes to attack him, but he gets his hands on her first.

Leanne manages to stab him with a pen to escape, but more members show up, leaving her no option but to go back into the car. She accidentally drops the car keys while coming back inside.

Visions of a man in a coat and Aunt Josephine haunt Leanne. She struggles to figure out who she can trust on the street. The presence of a mailman helps her retrieve her car keys.

Moments later, a tall man in black clothes with two twin girls arrives in a car. He tells Leanne that she should come back, and that’s what’s best for all of them.

Leanne replies that they can’t hurt her anymore. She isn’t who she was anymore; she is something more. The cult members stuff the car’s exhaust with leaves, which leads Leanne to suffocate while she attempts to start the car.

When one of the members of the cult begins hitting the car, Leanne desperately attacks him by moving the car in reverse. The rest of the cult members continue to approach her.

Soon after, pigeons descend from the sky and viciously attack all cult members. They then decide to back off and run away. Leanne comes out of the car and screams her heart out.

Leanne’s followers arrive, wondering if she is okay. She says it’s over, but they need to be smarter than this.

Leanne cleans up the mess created inside the house after she attacked the intruder. Dorothy arrives in a wheelchair and doesn’t pay attention to Leanne’s hospitality.

Julian informs Leanne that, according to the doctors, it’s hard to figure out whether Dorothy will recover from the fall, especially because of that spinal injury. If she keeps up with the exercise, she will regain most of her mobility.

Leanne likes to believe that now that she is home, she will recover. She plans to comfort her, but Sean says it’s not a good idea and that Dorothy needs her space right now.

An angry Leanne backs off. The floor in the basement then cracks all the way out to the sidewalk of the street.