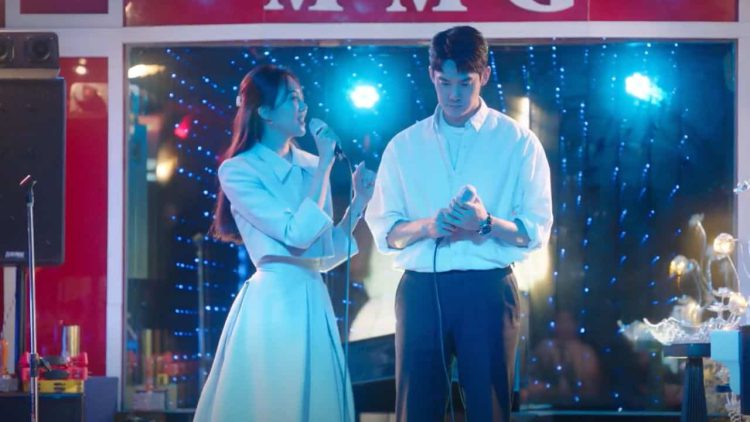 
The third episode of ‘The Interest of Love’ focuses on Mi-gyeong’s developing relationship with Sang-su and her new friendship with Su-yeong. The episode is now streaming on Netflix.

A man from a nearby food joint, Tongyeong Oyster Gukbap, comes to deliver breakfast to Su-yeong, but she does not even spare him a glance.

A flashback shows that Sang-su never sent Su-yeong the message informing her that he was waiting for her outside her house, it was Mr. Jeong’s message that she saw in the taxi.

Sang-su assumed that she was embracing Mr. Jeong when, in fact, she had tripped and he had prevented her from falling. She did not know that Sang-su was there and had misunderstood the whole situation.

That night, Mr. Jeong also confessed his feelings to Su-yeong. On the other hand, Sang-su decided against telling her that he came to see her last night even when she inquires about it.

Mr. Yuk’s untoward advances make Su-yeong uncomfortable. Mi-gyeong saves her and tells her to stand up for herself. Mi-gyeong then takes her out for lunch and expresses her desire to be friends with her.

While Mi-gyeong goes out with Sang-su, Su-yeong meets Mr. Jeong at night, and he tells her that she does not need to reciprocate his feelings right away. He shares his dreams with her, and she tells him that he reminds her of someone who had big dreams just like him.

Su-yeong remembers her brother’s death. Her brother loved her the most and had big plans for the future; he wanted her to be happy. When her father showed up at her brother’s funeral, she blamed him for his death and asked him to leave.

In the present, an angry Su-yeong storms into Tongyeong Oyster Gukbap, which is owned by her parents. She asks her father why did they have to move here, and he tells her that they wanted to see her from time to time.

She asks her father to stop pretending to care about her and to stay away from her. She questions her mother’s decision to take him back before leaving the place in tears.

Alone in her apartment, she thinks about how she is living her brother’s dream today. She tries to be happy for the sake of his promise.

Mi-gyeong and Sang-su spend the night at the office, preparing for their upcoming presentation. They have breakfast at Su-yeong’s parents’ joint, and Mi-gyeong starts developing feelings for him.

A persuasive Su-yeong manages to convince various VIP clients to consider her offers, while Mi-gyeong and Sang-su’s presentation goes well, and they spend more and more time together.

When Mr. Jeong remarks that Su-yeong looks happier, she tells him that she got certified in investment consulting and financial planning, but she never got the chance to be more than an ATM at the office.

However, now that she has been given an opportunity, she is trying her best to do well in the first season, which might get her another batch. This would eventually help with her position transfer.

While returning from lunch with Su-yeong, Mi-gyeong gets the news that Mi-gyeong and Sang-su’s presentation has been chosen as the top presentation in their district. In her excitement, she hugs Sang-su in front of Su-yeong.

To celebrate the occasion, all the employees go out for drinks. When Su-yeong’s superiors try to force her to sing, Mi-gyeong comes to her rescue once again. She drags Sang-su to sing with her, which makes people assume that they are dating.

Mr. Ma orders Su-yeong to run errands for him because Mr. Jeong is not there; he considers her to be at the bottom of the hierarchy. This time, Sang-su intervenes and does it on her behalf. When he returns, he finds her waiting outside and hands her a drink.

She implies that he is toying with her feelings. When he objects, she questions him about their date night again. She tells him that he was not late because of his pending work at the office but because he chose not to come.

She saw him hesitate before coming to meet her from the window, and that is what made her leave.

The Interest of Love episode 3