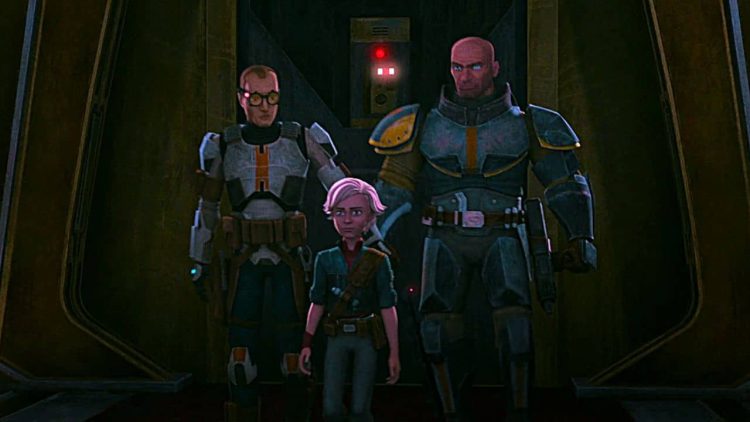 
In episode 4 of The Bad Batch, Tech, Omega, and Wrecker accompany Cid on a mission where Tech is called into action and has to use his superior intellect. The episode is streaming on Disney+.

Omega, Tech, and Wrecker are lounging around on Ord Mantell while Hunter and Echo are out on a job when Cid tells them that she has another mission for them.

She has them accompany her to Safa Toma as security since the place is a lawless haven for many. There is a circuit where riot races are held and Cid has a racer in the running earning her winnings.

She employs a bashful droid named TAY-O as her racer and it is highly confident in its racing ability. Tech and the others are fascinated by the race and its turbulent nature.

While they’re at their pit, they receive a visit from Grini Millegi, a menacing local gangster who knows Cid from her past. He claims to have the better racer and strikes up a little side wager with Cid on the winner.

Cid is certain that TAY-O will win but right before the end of the race, TAY-O wipes out after a one-two punch from two other racers. Millegi comes to collect his winnings but Omega negotiates a deal with him.

She offers double if they lose again but if they win, he has to free Cid. Millegi agrees and keeps Cid with him as collateral while Tech and Wrecker gather up the wreckage of the ship and the droid to build them back up.

TAY-O is reassembled for the race the next day and Tech spends the morning analyzing the course and the patterns of the different racers. TAY-O dismisses his methods but as it is walking through the pits, it gets mowed down by another racer coming in.

Millegi suggests a forfeit since they don’t have a race anymore but Tech volunteers to race instead. The gangster agrees to the amendment as Tech prepares to take the driver’s seat.

He lags back for the beginning of the race but insists that it’s all a part of his strategy. With some quick thinking, He manages to get to the front end of the queue, and right before the finish line, he is faced with the same maneuver that TAY-O faced.

However, he manages to successfully evade the attack and win the race. Millegi stays true to his word and lets Cid go with them as Cid admits that she owes them one. As they’re leaving, Millegi warns the clones that their loyalty to Cid may not be reciprocated so they need to stay vigilant.