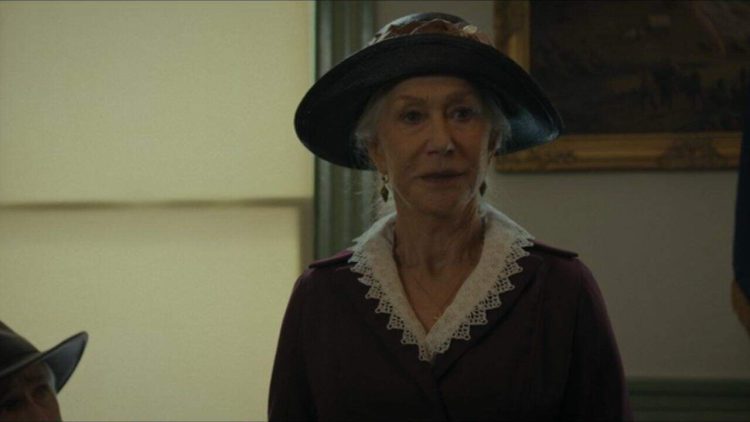 
In the fourth episode of ‘1923’, Jacob survives, but with the war upon them, Cara has to take his place to hide the condition of their family from the world. The episode is now streaming on Paramount+.

Cara goes out to sob by herself and then cleans her bloodied house. She puts her foot down when Zane insists that they should inform the sheriff about the attack. She forbids him to speak of it to anyone.

Jacob survived the night, but he is still not stable. Zane asks Cara not to hope too much for a miracle.

Emma digs a grave for her husband, and the men join her. Jack is injured, but he refuses to rest when Elizabeth and Jacob are recovering.

In Africa, Spencer is happy with Alexandra. She makes him promise that their relationship will always be like this. They discuss where they want to live for the rest of their lives, and she shares with him that she lost her brother in the war.

Only two of Banner’s men survive the fight with Jacob’s cowboys. They suggest they should leave the state, but Banner refuses.

To get an army of his own, Banner makes a deal with a powerful and rich man. Banner tells him he will gain control of Jacob Dutton’s ranch within six months.

Once Banner gets the Yellowstone from the Duttons, the man will mine where he wants, with the lease already paid. Banner gets financial aid, but not without a warning that his whole family will be killed if he cheats or lies to the man.

With Elizabeth’s father dead, her mother comes to take Elizabeth with her. She plans to break off Jack and Elizabeth’s engagement if Jack does not move with them. When Jack argues with her, she slaps him, and Cara slaps her to return the favor.

Jack and Elizabeth decide to stay at Jack’s home. When Elizabeth’s mother refuses to allow Elizabeth to marry Jack, Cara reminds her of her place. She then angrily takes her husband’s body.

Banner and his men steal the cattle owned by the Duttons. Jack wants to get it back, but an indecisive Cara cries at Jacob’s bedside. Jacob wakes up and tells her to be the leader. They decide not to fight for the cattle until Spencer returns.

Jacob knows that it could take a year for Spencer to come back, but they have no other choice. Cara refuses to hope. Their family does not leave anything to destiny; they fight for their beliefs until they get what they want or they perish in the pursuit.

When the nuns at the school continue physically abusing the girls, Teonna once again resorts to violence. Sister Mary knocks her out.

When she wakes up, Sister Mary tells her she wants to save her because she is a savage, just like her people, and she needs to be bathed in blood to be saved. Teonna is beaten black and blue until she agrees to be saved.

They cut her hair, read verses from the Bible, and painfully draw out her blood. This causes Teonna to leave the school in the middle of the night.

When her friend tries to stop her and remind her that they will be put in jail if they are caught, she asks her to show her a law that demands them to be a servant or get beaten. In fact, she takes her friend’s Bible and says she is going to make war.

She enters Sister Mary’s room in the silence of the night. She beats her with the Bible, chokes her to death, and brands her skin with a ruler while speaking in her native tongue; she tells her that this is the language of this land and that the land is killing her.

Cara attends the meeting of the Livestock Association in Jacob’s place. She confidently lies to the members that her husband has gone to Wyoming to search for their stolen cattle. She proposes to create a separate police force for the association.

She claims that a letter has been sent to the Governor regarding the same. When the members hesitate to vote, she shows her husband’s signature, which gets her the support she desired. She later tells Zane that she thought of all this on her way here.

She pushes the next meeting back by two weeks and leaves. Banner corners her, but she tells him that in order to prove to the association that she is lying, he will have to admit to his crimes.

She promises to deliver a slow death to him, as his fight is with her now. She leaves with a veiled threat involving her other nephew.

Alexandra finds Spencer’s unopened letters from Cara. He tells her that letters made men long for their homes during the war and got them killed, so he never opened his. After the war, his guilt prevented him from reading them.

She tells him they must face his demons and reads the letters for him. They spend the night laughing and crying over the contents of the letters.

However, the last letter about his brother’s death leaves them weeping. It has already been three months since it was written.