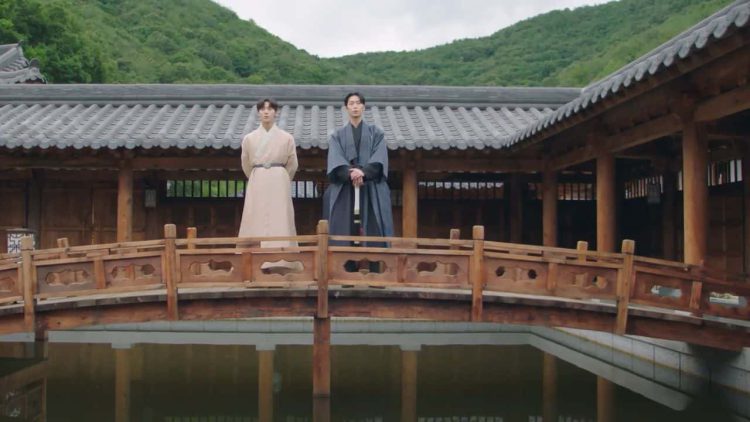 
In the fifth episode of ‘Alchemy of Souls’ part 2, So-i tells Yul about the parasite in his body while Jang Uk discovers Jin Mu’s involvement in the rumor about Naksu’s return. The episode is now streaming on Netflix.

So-i tells Yul that she transferred the blood parasite from her body to his when he was injured to save his life. He would have been fine if he had taken the medicine sent by her.

An upset So-i cuts her arm and asks him to give the parasite back to her. However, he tells her that the parasite has entered his core and is now feeding on his energy. Yul will die once his energy runs out.

So-i suspects that since Jin U-tak gave the parasite to her in the first place, it should be a Jinyowon relic. Therefore, there must be a way to take it out.

Yul comes to the conclusion that Jin Mu must be supplying the medicine to her. He asks her not to tell anyone about his condition and not to send him the medicine anymore.

Cho-yeon comes to meet Dang-gu. She, after accepting the diamonds he sent for her, shows him the charm that helps two people become lovers. She had kept this charm with her for the past three years, knowing he would never forget her.

Park Jin tells Jin Ho-gyeong that Jang Uk married Bu-yeon because she saw the energy of the Ice Stone inside him, and Bu-yeon now wants to protect him.

Meanwhile, Jang Uk wakes up next to Bu-yeon. With her by his side, he could be warm and sleep peacefully for the first time in years because she kept the wraiths away from him.

He allows her to stay in his room for the night on the condition that she stays on her side. She stays with him and pats him to sleep.

Master Lee visits Jeongjingak, which is now devoid of any mages except Jang Uk. He concludes that Jang Uk marrying Bu-yeon is a design of fate.

Yul shares his guilt with Jang Uk for fleeing without doing anything three years ago. Jang Uk takes full responsibility for everything that happened to ease his guilt. Yul also confirms Jang Uk’s suspicions that it was Jin Mu who had spread the rumor about Naksu’s return.

Bu-yeon regains some of her memories, and Jang Uk goes looking for her, as it was because of her that everyone at Jang Uk’s house was warm at night.

He finds her in the market and observes her. He approaches her after some time, and they bond while walking toward the palace to meet the queen.

Under the pretense of apologizing to the queen for ruining her banquet, Jang Uk figures out her plan to summon another Ice Stone by drying out the world. He acts as if he is in love with Bu-yeon and warns the queen not to touch her again.

Go Won, who feels like he is now just a tool in Jin Mu’s games, starts rethinking his equation with Jang Uk, who helped his turtle. Go Won is not aware that he did so for Bu-yeon.

Bu-yeon recreates a memory that she regained with Jang Uk and holds his hand, infuriating him. Jang Uk tells her that he would use her as Naksu’s substitute, making her think that he has no place in his heart for anyone else.

Park Jin and Master Yeom discuss the dark object of sorcery that Master Lee found in dried wells. Park Jin asks Dang-gu to find out how many wells have dried up.

Master Lee approaches Jang Uk and asks him to go to Jinyowon to see if the fire bird, the reason Jinyowon was built, is safe. The objects of sorcery that he found in the wells are replicas of the fire bird.

On the other hand, Jin Ho-gyeong, realizing that Bu-yeon is in love with Jang Uk and would not come back to her no matter what she is promised, invites her to visit Jinyowon with him as a couple to prove to her that they are truly married.

However, when Maidservant Kim clears his misunderstanding and tells him that Bu-yeon must be upset and embarrassed, he follows her to Jinyowon as her husband.

Desperate to save Yul, So-i meets Jin Ho-gyeong to ask her to kill the blood parasite in exchange for information about her real daughter’s identity, not knowing that Jin Ho-gyeong has already found her.

Since So-i knows the truth about Bu-yeon, she is locked up in Jinyowon. Her trusted employee asks for Yul’s help in saving her and tells him that Mu-deok was Bu-yeon.

Jin Mu asks Yun-o to use his family connections to smuggle the replicas of the fire bird into the capital without Songrim noticing, and he eagerly agrees.

Park Jin finally asks Maidservant Kim to marry him. She accepts the proposal amidst the cheers of Dang-gu and others.

Jang Uk insists that he and Bu-yeon spend the night at Jinyowon. In the privacy of their room, he asks her to open Jinyowon, as he wants to do what Master Lee had requested of him.

When Go Won discovers Jin Mu’s plan to summon the Ice Stone, he decides to end their agreement. However, Jin Mu states that he must first tell Jang Uk how he used and killed Naksu to beat him. If he fails to do so then their agreement would not end.

So-i puts the pieces together and realizes that Bu-yeon is Naksu, which scares Jin Ho-gyeong.

While walking with Jang Uk, Bu-yeon tells him that she used to imagine herself sitting alone on top of a tall tree, reminding him of Naksu again. She clarifies that this was her own thought, and she does not have the blue jade with her.

Jang Uk holds her hand again to see if it feels familiar, thinking he is going crazy because of her.