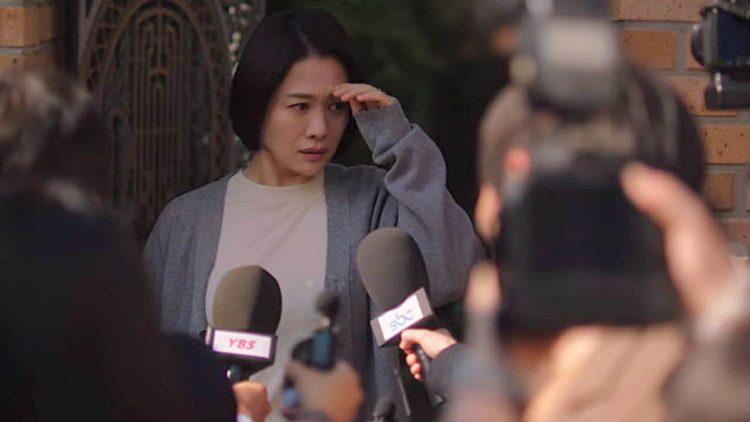 
Trolley season 1 episode 10 sees Hye-Joo meeting with a certain someone familiar with her dead son, while Joong-Do decides to go ahead with a major step, one he needs to get his wife’s permission for first.

Joong-Do and Woo-Jae meet the mill lady who’s still upset at the Assemblyman but after having shown the video of his getting beaten up by Seung-kyu’s father, she’s not as upset now. She asks Joong-Do to use her for his cause.

Yeo-Jin is surprised by her ex-husband who she lashes out at for appearing at her late daughter’s death anniversary. She blames him for her murder, for which, it’s revealed, he was put behind the bars, but only for seven years.

As Yeo-Jin unloads on the man, the scuffle is broken up by Hye-Joo who defends Yeo-Jin and asks her ex-husband to go away, calling herself family to Yeo-Jin.

Soo-Bin gets a call from her previous acquaintance who demands 1 million won and to secure the funds, she arrives at Yeo-Jin’s restaurant, asking her for 2 million won, which she gets wired to her bank instantly.

The same guy later calls Hye-Joo, from Soo-Bin’s older phone. She meets him at a restaurant and before he leaves, he slightly warns her that Soo-Bin is not a good girl and that she also has a proclivity for stealing things.

Seung-Hee and Ki-Young meet Seung-Kyu’s parents and she tries to tell them and convince them that she didn’t post what they shared online. Later, she tells Ki-Young that she’s going to Hye-Joo’s.

Ki-Young asks her to leave everything and go to Australia with him, but she refuses, claiming she can’t leave her mother alone. Later, Ki-Young calls Joong-Do and shares all the deets about the land speculation scam.

Following that knowledge, and Kang’s knowledge of Hye-Joo, the two politicians call it a truce for the time being. At the end of Trolley season 1 episode 10, Joong-Do asks for his wife’s consent to publicize her traumatic story before their enemies can publicize it and gain the upper hand.

Hye-Joo is initially hesitant but eventually agrees to give consent for it. However, the next morning comes with a shock when Hye-Joo is bombarded by numerous reporters outside her house, asking her if she really committed a murder 20 years ago.